Topping Out Ceremony for the Habersham Administrative Center

Clarkesville, GA – Cooper and Company was proud to sponsor the official “topping out” ceremony for the Habersham County Board of Commissioners at their new Administrative Center on May 21, 2018.

Members of the County Commission, Habersham County Employees from the Planning Department, Sheriff’s Office, Fire Department, and other Emergency Services, along with city dignitaries from several local cities joined with Cooper and Architectural firm Precision Planning to celebrate this milestone.  County Commissioner Vic Anderson was quick to address his appreciation for members of the community in attendance that included many that worked for local government entities.

Paul Hoover from Precision Planning explained to many members of the crowd the history of topping out ceremonies and why they are so widely utilized in the construction industry. Paul was followed by Project Manager Chris Ritchie who used 3-D drawings of the steel structure to help the crowd visualize where the signed beam would be located for years to come on the mezzanine level of the structure. 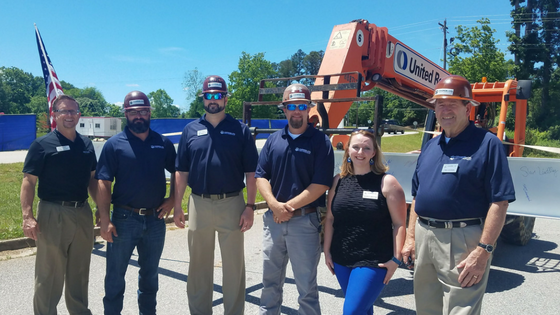 Paul Hoover informed the crowd that they would see a lot of work happen quickly as long as the weather cooperated in the next few weeks and then it would appear to slow as efforts would be heavily underway internally for the new construction project.

When completed, this new facility will feature three occupied levels of space for the county to use for administrative purposes as well as the fourth mezzanine level to house mechanical components for the facility.