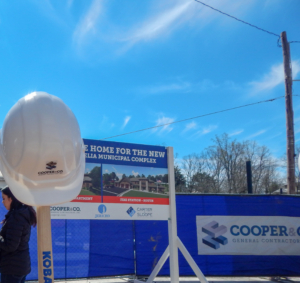 Remarks were given in a brief ceremony by Mayor J.C. Irby and Cornelia Ward 3 Commissioner Don Bagwell.

In a quote from AccessWDUN, the Mayor stated that “The future is a great word to use, because the facilities that we have now all belong to the past,” Bagwell said “In fact, most of them were not even built to be what we’ve sort of adapted them for use. The good thing about the new structure is it will allow us to integrate all the different departments together efficiently to communicate and reduce, or at least control, the cost of government so that we’re not constantly having to spend money foolishly trying to get people to talk to each other.”

Commissioner Don Bagwell noted that that the focus of the new complex was to update the city hall/police station and a fire department headquarters station but that the aesthetics of the new structures will enhance the downtown area and the city as a whole.

Demolition of the existing fire station is expected to begin sometime in late April after the fire department has completed moving itself to the City’s secondary fire location. The overall project is expected to take approximately 14 months to complete.